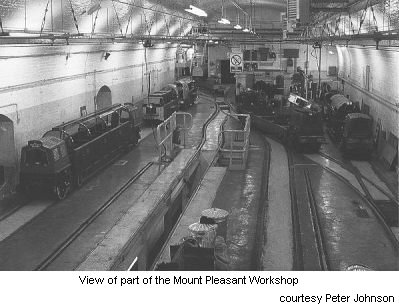 The 'Car Depot' as it was known when it was built, was designed to store most of the the 1925 stock, although it probably never did. The depot consisted of two parallel brick lined tunnels, built using the cut and cover method. There is a forty foot arch at one end linking the two tunnels. Being at basement level, of the Mount Pleasant building, there was a lift shaft for lifting the rolling stock and materials in and out of the system.

Access from the main line was via a steep ramp up from Mount Pleasant station. The depot had various sidings and spurs for storage and repairs, some having inspection pits. For safety reasons the depot did not have any conductor rails, except for a short brake testing section, instead current was taken from a cable attached to an overhead trolley wire. Points in the depot were all operated by hand, from sunken point levers. 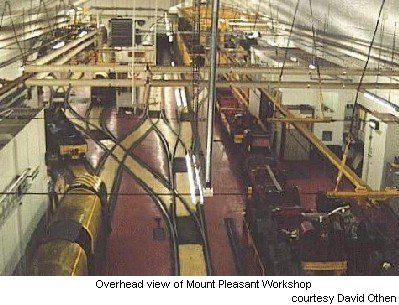 Each train on the system, received a regular service every 4,000 miles (6,400 Km), this consisted of an inspection of all the parts, checking for damage, worn parts and general operation of the unit. Every 100,000 miles (160,000 Km) the units received a complete overhaul.

The Depot also had a good selection of machinery and tools, so that most repairs could be carried out in-house. The only job to be contracted out was motor armature rewinds. One interesting item of machinery was the motor test- bed, the motors and axles were run for up to a week to 'bed' them in. One unusual function of the depot was that the rails from the main running tunnels were taken there to be turned around, as the main tunnels are not wide enough. The rails were turned end for end, now and again, to lengthen the life of the rail by promoting even ware to the tops of the rails.